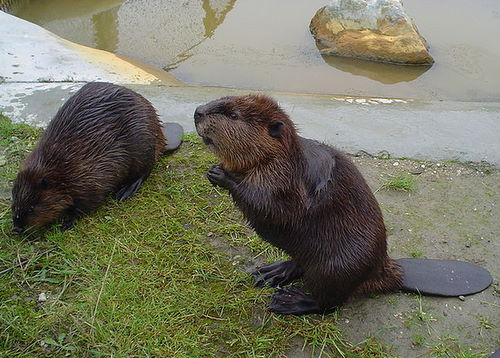 Did you know that beavers are one of the largest rodents in North America? North American Beavers are large brown furry rodents with small eyes, small rounded ears, large orange teeth, and a large flat, scaly tail. These active animals weigh between 44 to 60 pounds. They are about 3-4 feet long. Beavers live in ponds, lakes, rivers, marshes, and streams all across North America.

Beavers are very busy. They spend most of their day searching for food and trees to build their dams and lodges. It is common to see beaver near rivers and streams. Beavers live near water because they have short legs and do not move well on land. They stay in the water as much as possible to avoid predators. Their large webbed feet allow them to swim powerfully through the water.

Beavers are related to mice, porcupines, rats, and squirrels. Beavers have long, sharp teeth known as incisors that are used for gnawing. These teeth are always growing so it is important for the beavers to keep them trim by continuously gnawing on trees and branches. The incisors on beavers can grow as much as 4 feet per year! Beaver teeth are so strong that they are able to chew through large tree trunks.

Beavers love to eat the bark and leaves from the trees that they fell. Their favorite trees are aspens but they will also eat birch, alder, willow, and mountain maple. They usually prefer trees between 2-6 inches in diameter. A busy beaver can chew through a 5 inch willow tree in 3 minutes! With the leftover wood they create dams and lodges. A pair of beavers takes down about 400 trees per year.

Beavers seem to keep the same mate for life. They mate between January and February and the babies or kits are born 4 months later. The kits weigh about 1 pound each and there may be anywhere from 1 to 8 kits in a litter. The kits stay with their parents for 2 years until a new litter is born. The kits learn to swim in the lodge within 30 minutes after they are born. Sometimes when they get tired their Mom carries them on her back!

Did you know that beavers are the only creatures besides humans that have such a changing effect on the landscape? Beavers change the landscape with the dams they build. A dam is a barrier that stops the flow of water and forms a pond or lake. These new ponds make it easier for beavers to access trees found along the shoreline. A mating pair of beavers will usually set out to find a stream where they can build a dam. They collect logs and branches in a pile to create the dam and then use grass and mud to fill in the spaces between the branches. Eventually the water will pool up on one side of the dam to form a pond. Oftentimes the dams are strong enough for humans to walk across!

Beavers live in shelters called lodges. Beavers start working on their lodges in the fall. Some beavers build in existing lakes while others build in the newly formed ponds that they made with the dams. The lodges must be ready by winter to shelter the beavers away from hungry predators such as wolves, foxes, and otters. Lodges are usually cone shaped with underwater entrances and are built along the shore. The beavers build from the inside out using mud, grass, and branches. Most predators find it too difficult to break through the complex network of branches and mud so the beavers stay protected. Beavers that live in rivers do not usually build lodges instead they create burrows out of the mud along riverbanks.

When the lakes and ponds freeze over, beavers swim in the water underneath the ice. They have thick underfur that keeps them well insulted and a thick layer of fat under their skin. Beavers also keep their fur waterproof by rubbing an oily substance on their fur that is secreted from scent glands.

Beavers have large webbed hind legs that act as paddles when they swim through the water. They have a large flat tail that helps them steer through the water. They also have clear eyelids that make it possible for them to open their eyes underwater. These animals can stay under water for as long as 15 minutes because of their specially adapted lungs.

Beavers have wide, hairless, flat tails. Their tails are not only used for steering but also for balance, warning signals, and fat storage. When beavers chew on trees they use their tail like a kick stand to give them support. When a beaver feels threatened by danger it will slap its tail on the water as a warning to the predator. Beavers also store fat in their tails for the long, cold winters.

Beaver dams and lodges are two easily identifiable clues of beaver activity. Another clue is to look at the trees along the shoreline to see any signs of gnawed trees. Beavers have a dramatic effect on the land. The dams they create provide new habitat for fish, plants, otters, and other underwater creatures. The new ponds also provide new water sources for moose and wolves. The land that dries up near the dams also becomes reforested because of its rich, fertile soil. Beavers are extremely important for our forests.

Did you know that beavers are responsible for the exploration and settlement of Canada and large parts of the northern US? In the 1500s, European fishermen brought beaver robes purchased from the Indians back to Spain. The Europeans prized the beaver fur because of its warmth and its ability to be made into felt hats. Soon there was a quest in Europe to collect beaver skins from Canada and the US to sell back home. In the 1600s British merchants traded with the local Cree Indians for beaver skins. The Indians did all of the trapping and the Europeans traded them blankets, weapons, and beads for the skins. The Europeans hired French Canadian farm boys known as voyageurs to paddle huge birch bark canoes from Montreal to the Indian villages to collect the beavers. Beaver populations all over North America decreased rapidly until the 1900s when regulations were set that limited the number trapped.