The bobcat has a short “bobbed” tail and long tufts of black fur that stick up from its ears. Photo by Don DeBold.
Image Source

The bobcat is a small wild cat with short brown fur that is speckled with many black markings or spots. They have a short tail (around 5 to 7 inches long), and often their bellies are white. Bobcats have easily recognizable tufts of short black hair that stick up from the pointy ends of their ears. Adult bobcats can weigh anywhere between 10 and 40 pounds, and their bodies are usually between 2.5 and 4 feet long.

Where do bobcats live?

Bobcats live in almost every type of habitat on the North American continent. They are found in areas where trees or bushes grow. You might see a bobcat in the desert, on a mountainside, or in a wet swampy area deep in a forest.

What does a bobcat eat?

Bobcats are carnivores. They mainly hunt and eat rabbits and hares, although they will also eat rodents, birds, reptiles, snails, and occasionally deer. They sometimes scavenge meat from animals that are already dead.

Bobcats are nocturnal. This means they are more active during the nighttime than they are during the day. Bobcats mark the edges of their territories, or the spaces they live in, with urine, feces and scratch marks on trees and plants. When another bobcat encounters one of these signs, it uses its sense of smell to learn about the bobcat that lives in that territory. Because bobcats can live in a variety of habitats and will eat many different kinds of food, they have been able to adapt to living in many areas on the North American continent. 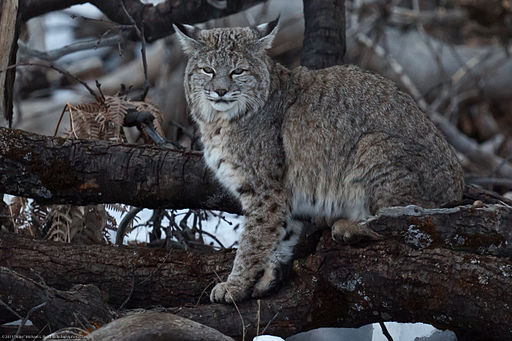