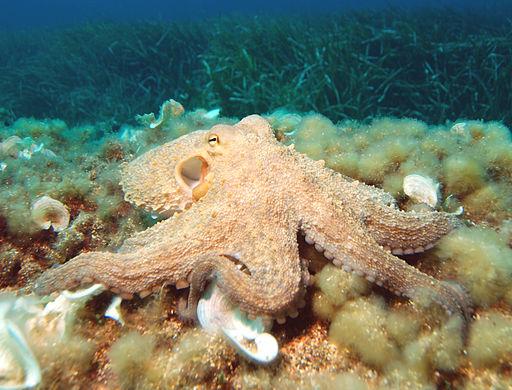 The common octopus has long arms with many suckers on each arm. This octopus uses its suckers to move and to grab animals when it is hunting. Photo by Albert Kok
Image Source

Octopuses are invertebrates, which means they have no bones in their bodies, and every part of an octopus is soft except for its hard, beak-shaped mouth. They are also cephalopods. A common octopus body is made up of a big head and eight long arms with many sensitive suckers on each arm. The octopus uses its arms to move itself across the ocean floor and to search for food.

Where does the common octopus live?

Octopuses live in the oceans. The common octopus lives in tropical, subtropical, and temperate waters.

How do octopuses hunt?

Common octopuses sometimes hunt by sticking their arms under rocks and into small spaces where animals that they eat hide. If an octopus finds a clam, oyster, snail, or even another octopus to eat it uses its suckers to grab the animal and pull it out of the hiding spot. The octopus wraps the animal in its arms and emits a chemical that stuns the animal. While the animal is stunned, the octopus moves to a protected spot or a small cave where it can enjoy its meal.

Common octopuses can be hard to see because they change the color of their skin to match their surroundings. When they are not hunting they spend much of their time hiding beneath rocks in caves that are called dens. One good way to spot a common octopus den is by looking for a pile of shells that the octopus pushes out of its den after it is done eating. This pile of leftover shells is called a midden.

How do octopuses move?

Octopuses sometimes leave the ocean floor and swim. They suck water into their mouths and then push the water out of a valve on their heads to propel themselves backwards. If a common octopus feels threatened by another animal, it may squirt a cloud of ink and quickly swim away as it tries to escape to a safe place. 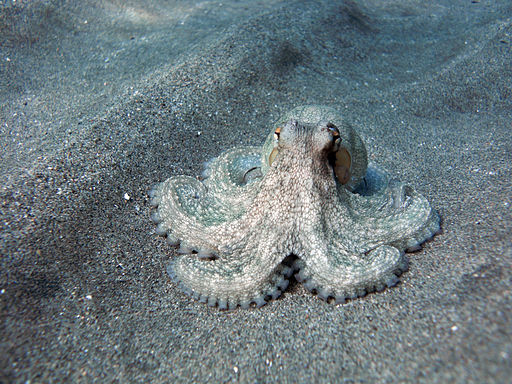 Common octopuses can quickly change the color of their skin to match their surroundings. By Theasereje via Wikimedia Commons
Image Source

This octopus is swimming by sucking water into its body and then spitting it out. By Albert Kok
Image Source