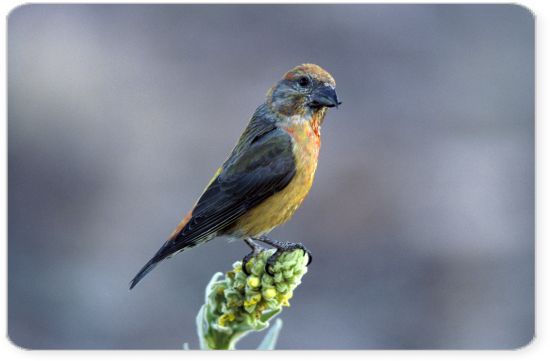 The red crossbill is a bird in the finch family, Fringillidae. Crossbills get their name because their beaks cross at the tips. Adult males tend to be red or orange in color, and females green or brown, but there is much variation.

Red crossbills are specialist feeders on conifer cones. Their unusual bill shape is an adaptation to assist the extraction of the seeds from the cone. These birds are typically found in higher northern hemisphere latitudes, where their food sources grow. Crossbills breed very early in the year, often in winter months, to take advantage of maximum cone supplies.

A crossbill’s odd bill shape helps it get into tightly closed cones. Crossbills get the seeds out of conifer cones by inserting the bill between the cone’s scales and twisting the lower part of the bill.  A bird’s biting muscles are stronger than the muscles used to open the bill, so the red crossbill places the tips of its slightly open bill under a cone scale and bites down.  The crossed tips of the bill push the scale up, exposing the seed inside. Then the bird extracts the seed at the bottom of the scale with its tongue. Conifer seeds are so important to the that it even feeds them to its young.

Map of the Crossbill’s range