This eastern box turtle was photographed in North Carolina, where the box turtle is recognized as the official state reptile. Photo by Ken Thomas, Image Source

The eastern box turtle is a member of the reptile family. Like all reptiles, turtles hatch from eggs and a turtle’s internal body temperature is easily affected by the air or water around it. When temperatures are colder, turtles become less active. In areas with cold winters, turtles hibernate, or become inactive, during the cold months. Turtles that live in the water burrow deep into the mud and wait for warmer weather. Box turtles live on land, so they hibernate beneath leaves on the forest floor, inside dead tree stumps, or in other places where they can get some protection from the weather.

Eastern box turtles are omnivorous, which means that they eat both plants and animals. Box turtles eat snails, slugs, worms, mushrooms, wild berries, insects, and even dead animals they may find on the forest floor.

Most turtles can pull their head, legs, and tails inside their shell when they feel threatened. However, eastern box turtles have a special adaptation: after a box turtle pulls it head and legs inside its shell, it uses a special hinge to bring the top and bottom parts of its shell together and make a completely closed box. The box turtle’s strong defense against predators helps this slow-moving animal live up to 80 years in the wild!

Box turtles live in many places east of the Mississippi River. They are hunted by raccoons, foxes, skunks, and some snakes. Their box shells can protect them from these predators, but are no match for a car or a truck on a road. 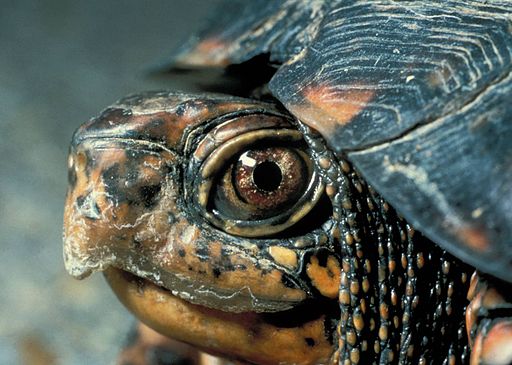 This box turtle has its head partially retracted inside its protective shell. Photo courtesy of the National Park Service. Image Source 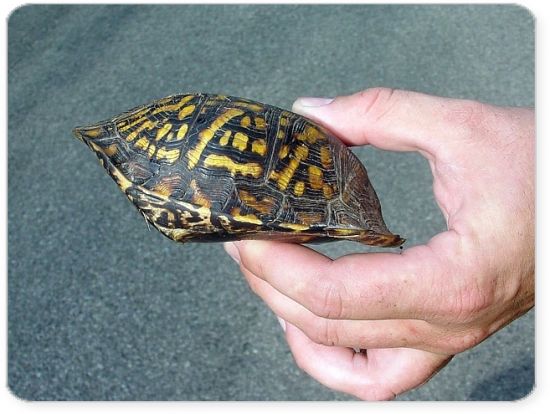