This is one colony of giant brain coral living underwater. The ridges in the colony look brown, while the valleys look green. Photo by Nick Hobgood
Image Source

Giant brain coral polyps have tentacles on the ends of their tube-shaped bodies that the polyps extend at night and use to catch and eat zooplankton. Zooplankton are tiny animals that move with ocean currents.

Coral polyps have another food source: tiny plants called algae grow inside of the polyps’ hard protective shells and produce food that the coral polyps eat. The coral shells provide shade for the algae when the sun is so bright that it would hurt or kill the algae plants. This type of relationship, where two species help each other meet their needs for survival, is called a symbiotic relationship.

Brain corals grow in warm water that is clear and shallow, usually less than 250 feet deep. Because they are attached to the ground and cannot move, corals are sensitive to changes in water temperature and water quality in the places where they live. If the water changes too quickly, or if the changes are extreme, the coral may die. 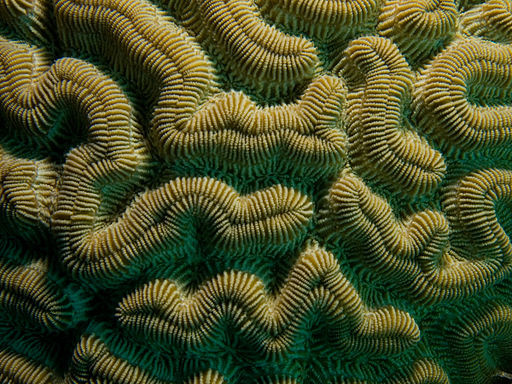 This closeup photo of a giant brain coral colony shows many coral polyps living near each other. Each dot in the photo represents one coral polyp’s protective shell. Photo by Nick Hobgood Image Source 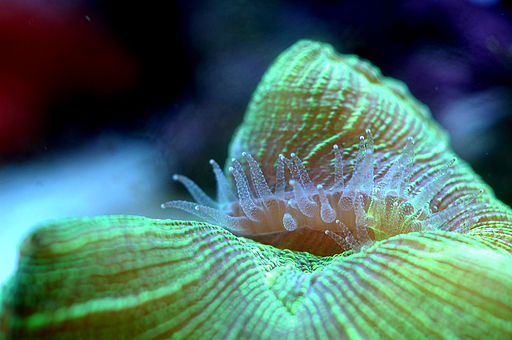 This extreme closeup photo shows one individual brain coral polyp with its tentacles extended from inside its protective shell. Photo by Jmk777  Image Source