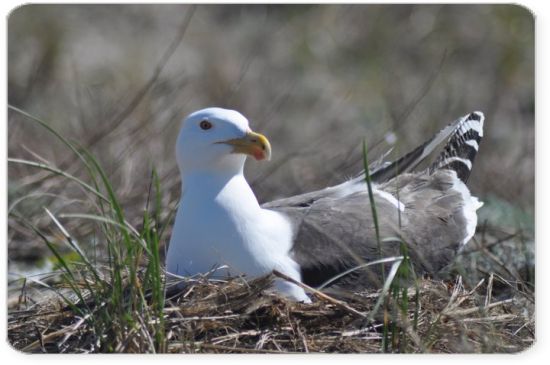 The Great Black-backed Gull is the largest gull in the world. Amanda Boyd, U.S. Fish and Wildlife
Image Source

They normally live along the North Atlantic coast. Their range has been increasing farther south along the East Coast and even into the Great Lakes. In the winter, they travel far out to sea.

Their feathers were used for fashionable clothing in the 1800s. Once this stopped in the early 1900s, the Great Black-backed Gull range increased.

Great Black-backed Gulls like to eat fish, marine invertebrates, mammals, insects, birds, eggs, carrion, and refuse. They usually capture food near surface of water or on shore. They have been known to steal food from other gulls. They swallow their prey whole. The Great Black-backed Gull is a predator of other colonial nesting birds, like puffins and terns.

Same as above links.