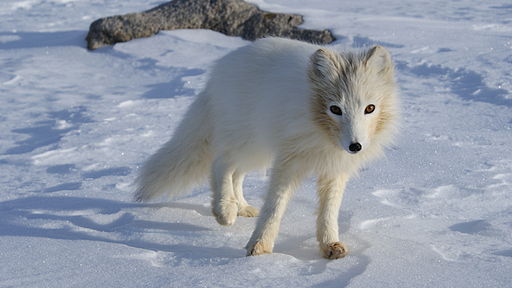 By Algkalv (Own work) Image Source

Arctic fox are small predators. They usually weigh less than 10 pounds (4.5 kg). They prey on small animals, including lemmings, voles, and birds. When food is scarce, arctic fox have been known to follow larger predators such as wolves and polar bears in order to scavenge from their kills. This is a risky behavior because wolves and polar bears prey on arctic fox. Another important predator of arctic fox is humans, who use its fur for clothing.

Arctic fox live on the tundra. They range from coastal areas to the edge of the boreal forest and will migrate long distances in search of their primary prey, the lemming. Arctic fox have circumpolar distribution. In North America they are found in northern Canada and parts of Alaska.

Despite their small size, arctic fox are incredibly well adapted to life in the cold. They have coats that grow very thick in the winter. Their fur even grows more thick on the bottoms of their feet, which helps insulate their feet from the cold snow and may help them get better traction on slippery ice. In winter, arctic foxes maintain a thick layer of body fat that helps them stay warm in temperatures that can reach minus 60 or even minus 80 degrees fahrenheit. They can slow down their bodies’ metabolisms when temperatures drop, and they are able to maintain an internal body temperature that is up to 200 degrees Fahrenheit above the outside temperature! 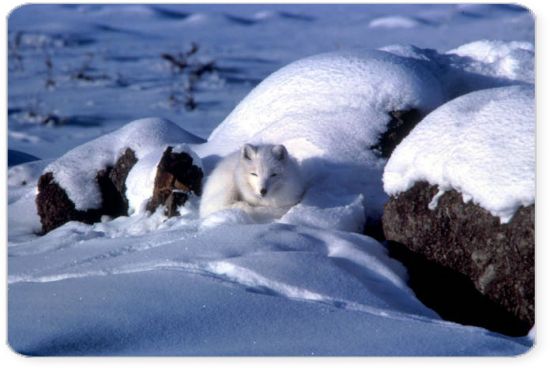 Arctic fox curl up with their big bushy tail over their feet (and although not pictured, ofen their nose too) to help them stay warm when they are sleeping. US Fish and Wildlife Service, Keith Morehouse Image Source 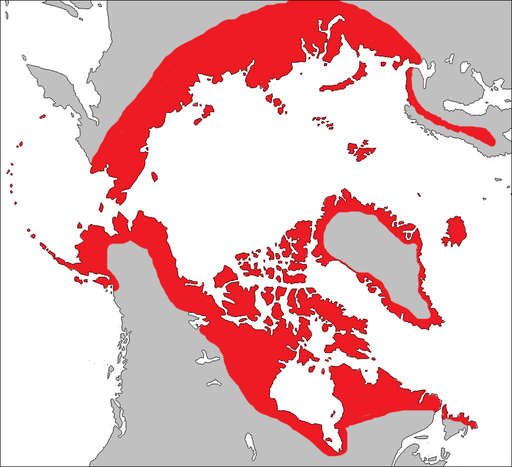 Arctic fox’s circumpolar range. Gray areas are land, white areas are water. Although it is not marked on this map, in winter arctic fox will travel far out on the ice in search of food. By Masae (own image). Image Source